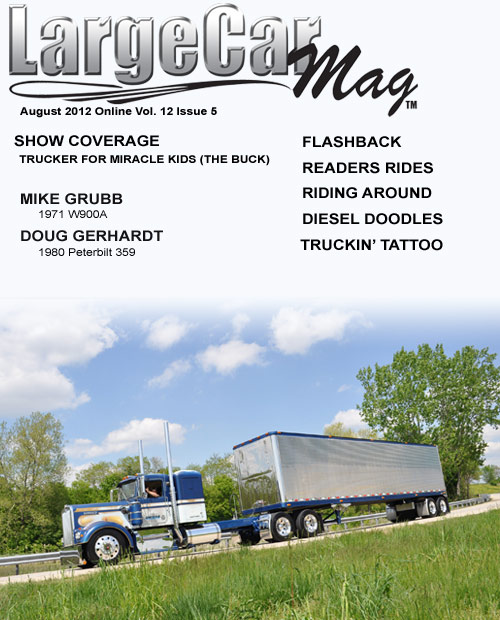 The August 2012 online issue of LargeCarMag.com is now available.

Only a few owners have had their truck featured in LargeCarMag twice but Mike Grubb of Denver, Pennsylvania is the first to have two LargeCarMag cover trucks. What’s even more impressive is Mike is only 24 years old! Equally impressive is the story behind Mike building this 1971 Kenworth W900A.

These two large Freightliners are owned by Daniel and Phyllis Snow and Jayme and Whitney Snow.

Rich Stark caught this very large Van Kampen 389 while out and about. Van Kampen has always had nice rides and this one is no exception!

For years we were teased with pics of a very cool 359 on the Pickett Custom Trucks website. When this cool 359 showed back up on Picketts website getting a makeover, we knew we had to learn more. Turns out the 1980 Peterbilt 359 and 1997 Mississippi propane trailer belongs to Doug Gerhardt of Snohomish, Washington. Doug’s 359 rolled off the Peterbilt production line in Newark, California on December 21st 1979 as a 220” wheelbase, aluminum frame, 400 Cummins with a 12/5 13 speed transmission, short hood with a 36” crawl through sleeper.

Way back when my transportation was a mongoose bmx bike I did my normal check of the posters at the local hobby store and found one of the coolest trucks I had ever seen, the truck was named “southern comfort”.

This doodle was sent to us by Gabe Bush of Idaho Falls Idaho.