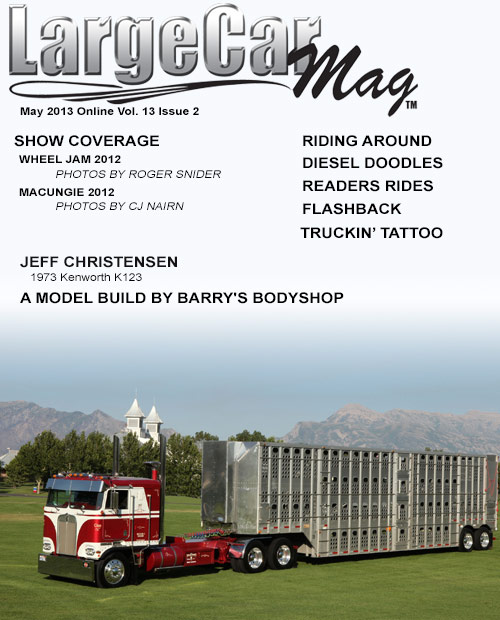 The May 2013 online issue of LargeCarMag.com is now available.

They say history always repeats itself, and cabover fever definitely seems to be making a comeback, though you’d be hard pressed to find one nicer than this. This 1973 Kenworth K123, is owned by 15 year veteran Jeff Christensen, and his wife.

Bob H Davis of Flatwoods West Virginia sent us this very cool readers ride. Bob bought this 1977 Kenworth W900A In November 1984 and has put three million miles on it since then!

Roger Snider once again made the trek to the South Dakota State Fairgrounds in Huron South Dakota, on June 1-3rd, for the 9th annual Wheel Jam truck show for coverage right here in LargeCarMag.

I caught this large C&J Express 379 at the Mid America Truck Show in Louisville back in 1993.

Jason Parrent of Melbourne Australia sent us this picture of his tattoo. Jason has been truckin for 23 years and is a huge Kenworth fan, these are some of his all time favorite Kenworth’s.