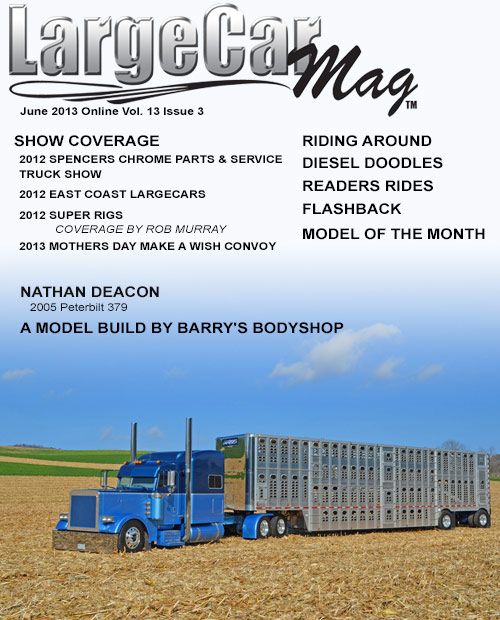 The June 2013 online issue of LargeCarMag.com is now available.

They say everything happens for a reason and that’s definitely the case with this feature on Nathan Deacon Trucking’s 2005 Peterbilt 379.

Back in May I ran into Chad Blackwell in Greencastle PA. Wound up having a nice long conversation. Most people know Chad for his 379 but I’m a little partial to this K100 he’s been truckin in lately. Good seeing you Chad!

Tim Ahlborn saw Jade’s 389 called Sublime at a truck show in St. Ignace Michigan and knew he had to build a model of it! Here is the end result, based on a 1/24th scale Italeri Peterbilt 378 reworked into a 389.

These pics are of the finished roof brace in sleeper and frame is in first coat of primer.

Spencers Chrome Parts & Service Truck Show seems to get bigger every year and 2012 was no exception! Held July 8th at their shop in Watsontown, Pennsylvania .

Rob Murray made the trip to the Speedco in Joplin Missouri May 17th-19th for the annual Shell SuperRigs competition.

This year’s Make a Wish Convoy was held on May 12th In Lancaster County, PA and drew
over 300 trucks and many wish kids that got to ride in various truck in the convoy.