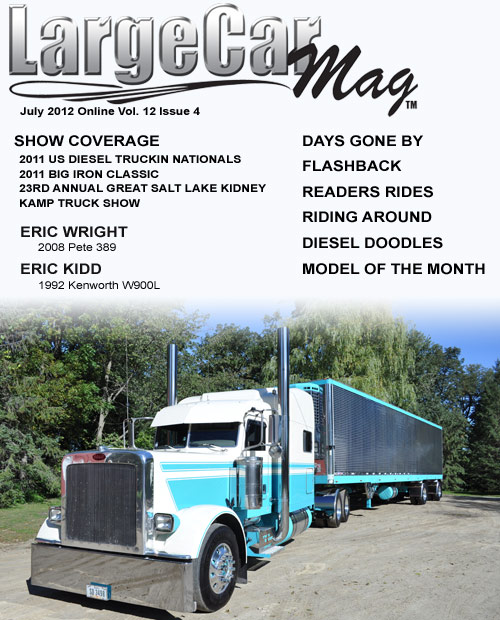 The July 2012 online issue of LargeCarMag.com is now available. Please don’t forget to stop by and visit our advertisers and tell them where you saw them! Our 2012 shirts, mousepads, hats and LCM Southern Classic DVD’s are available in our online store for purchase. Also, we now have info on our Southern Classic Truck Show.

Over the years we have shot features on trucks that were sold before we could run the feature, and in most cases because we like to keep things relevant we wont run the feature. Sometimes, however, the truck is so cool it just wouldn’t be right not to share with the LCM community, this is the case with Eric Wright’s 2008 Peterbilt 389 you see here.

Current Issue Navigation<< July 2012 Riding AroundJuly 2012 Model of the Month >> Ernie Sargent of Chicopee Massachusetts is the owner of this 1996 Kenworth W900L. Its powered by a 500 Detroit backed by a 13 spreed transmission and currently has over 1.3...

Jerry Doucet sent us this model he calls “smoke n gun”. We didn’t get many details on this one but its just too good a model not to share, great work Jerry!

We first saw this large 1992 Kenworth W900L one night at the truck stop off exit 98 of I-95 in Virginia while we were on our way to a meeting about the first Southern Classic.

The Great Salt Lake Kidney Kamp Truck Show was held August
12-13th at Electric Park in Lehi, Utah. Roger Snider made the trip
and reported back that Jeff England and his crew did another
fantastic job putting on the very special show.

The 2011 Big Iron Classic was held September 9-10th at the Dodge County fairgrounds in Kasson Minnesota.

In this installment of Days Gone By we’re heading north to bring you an exclusive story out of Allendale, Michigan.