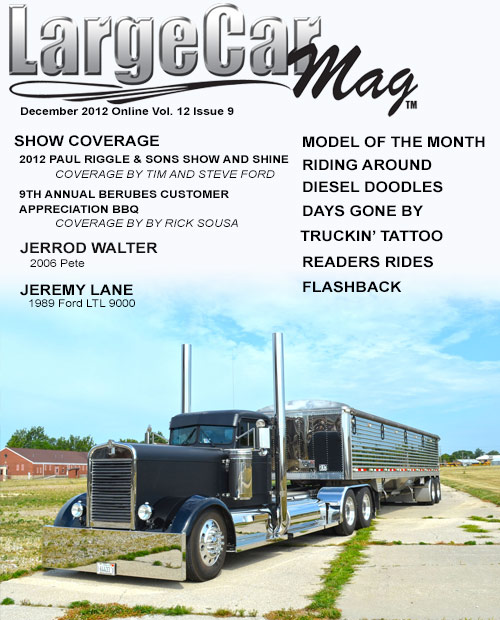 The December 2012 online issue of LargeCarMag.com is now available. Merry Christmas and Happy New Year to all of you!

We first saw Jarrod Walter’s 1953 Kenworth W925 needle nose on the internet and instantly wanted to see more, but more importantly wanted to get it in front of our cameras! Bryan Wright did some detective work and tracked down a name and number for Jarrod and as it turned out Jarrod lives in New Berlin Illinois, which made the Top Gun Largecar Shootout in Rantoul Illinois the perfect place to meet with Jarrod.

Rich Stark caught this very cool W900B while out checking things out in Vegas. Nice catch Rich, don’t see too many this nice anymore!

Bill Mowatt of Spanaway Washington sent us these pics of his awesome 1997 Peterbilt 379. Although you would never guess it, this big ride has 1.7 million miles on it! Bill hauls LTL both ways between Washington state and the mid west and would like to thank Eagle Trucking for keeping him busy.

George Fiebe sent us this issues model. Upon receiving his March 2011 issue and checking out the model in that issue (built by Jay Lockard) George immediately went to his show cabinet and pulled out this model which has many striking similarities.

Jeremy Lane of Rensselaer Indiana is the owner of this very large 2006 Peterbilt 379 and 2012 Mac dump trailer.

Late last winter I got a call from long time friend Chris Riggle asking our opinion on a good date for a show in Pittsburgh. Since the Pittsburgh area has been in need of a big show for quite some time, we gladly gave our opinion and the date of June 9th, 2012 was set for the Paul Riggle and Sons Show and Shine Truck show.

Brian and Marilyne Lauersdorf sent this picture of their matching tattoos.

This installment of Days Gone By begins in Chicopee Mass in the spring of 1978. The local paper announced a new truck dealership was coming to town and would be know as Consolidated Peterbilt West.