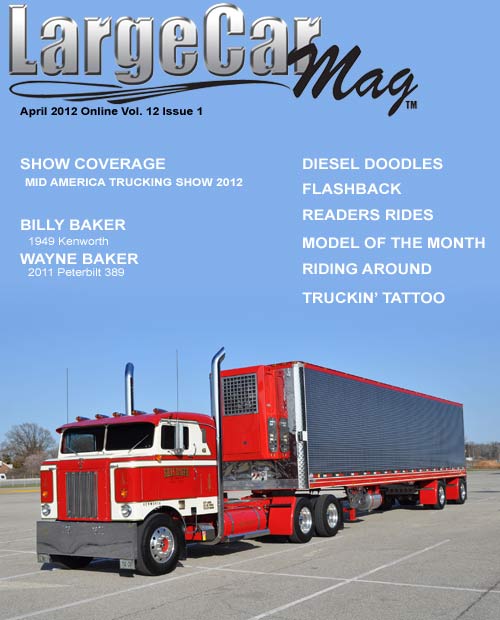 The cover of the April, 2012 Online edition of LargeCarMag

The April 2012 online issue of LargeCarMag.com is now available. We hope you are enjoying the new layout!

Unfortunately we never got information on Billy Bakers incredible 1949 Kenworth Bull nose you see here. But this truck is just too cool not to share with the LCM community.

As always the April issue’s riding around is all the largecars found surrounding the Kentucky Fair and Exposition Center at the Mid America Trucking Show as well as the trucks parked at the papa johns stadium parking lot.

Back in the June 2009 print issue we featured Wayne Baker’s 2002 Peterbilt 379. Wayne purchased that truck from Jeff England of Pride Transport. Over the years that Wayne owned it Wayne made lots of changes to make it his own.

This years Mid America Trucking Show was held March 22-24th. As we pulled in Tuesday night, before checking into the hotel we HAD to check out the trucks that were in the prep lot where we ran into lots of friends and what was supposed to be a quick drive through the prep lot turned into a lengthy stop catching up with old friends. Once we got set up (with the help of Larry Olsen, thanks Larry!) we noticed the crowds seemed to be way up this year.

Nine year old CalebBaertschi drew this awesome doodle. Great work Caleb, we sure love this one!

On a trip to California, While waiting to get washed at Calivas Truckwash “Vince” of San Pedro, California. Came over to admire the truck I was in. While chatting, Vince mentioned the he had a trucking tattoo.

In this month’s flashback I thought I would post some of the GMC Generals I took pictures of in the 80’s.