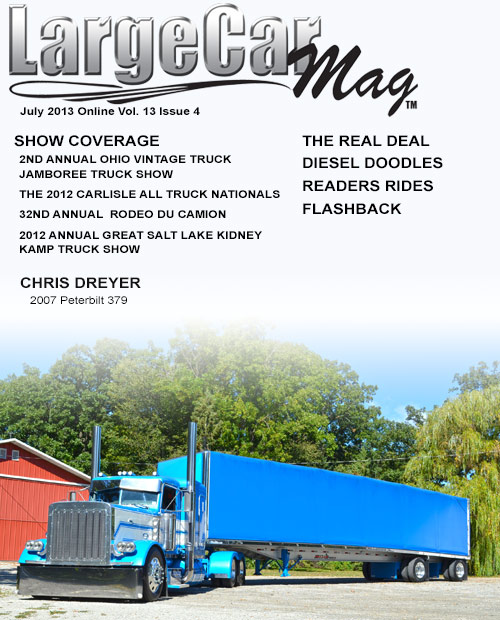 The July 2013 online issue of LargeCarMag.com is now available.

Chris bought this 2007 Peterbilt 379 you see here in 2008, and has since changed virtually everything about the truck, except the paint, making it more “his” truck.

I pulled into the Petro in Oklahoma City to grab some fuel and a drink. After I pulled off and parked in the back forty. My old friend Charlie Klopp pulled in behind me. Now people who know me know how my mouth can sometimes never stop running once it gets started and Kloppy is one of the same! So as we stand face to face yelling at each other non-stop to see who you can tell their stories first and who will back down and listen, in our case neither of us back down and we only hear 50% of each others stories.

Kevin Bertrand owns this 2000 Freightliner. A 550 Cat powers Kevin’s Freightliner backed up by an 18 speed transmission with 4:56 rears.

The 2nd Annual Ohio Vintage Truck Jamboree was held on Saturday June 22nd and Sunday June 23rd 2013 in Ashland Ohio as part of the Gearhead Grand Slam, which also featured a Pro-Series motorcycle race on Friday night, a demolition derby on Saturday night, and a Vintage Exhibition truck pull on Sunday morning.

The 2012 Carlisle All Truck Nationals were held August 3-5th 2012 at the Carlisle Fairgrounds in Carlisle Pennsylvania.

Dylan Bradshaw sent us this doodle, Dylan didn’t send along any info but its cool enough that it speaks for itself.

The Great Salt Lake Kidney Kamp Truck Show was held August 8-11, 212 at Electric Park in Lehi, Utah. This was the 23rd year for this annual event!